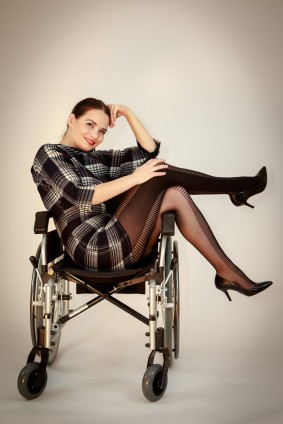 Seriously, what is the purpose of that photograph? There were several other stock photos of that same girl, and in one she’s standing on the chair. What scenario could call for that photo? Is it a ‘look I’ve triumphantly overcome my disability and am at long last able to be a sexy, bookish model’ kind of thing? (Sexy was one of the keywords for the photo along with baby carriage for some reason.) I refuse to link to the other photos, but I’m sure you’ve seen many like it. Well not exactly like it, because it’s silly. What I mean is you’ve likely seen many pop culture images online or on tv of non-disabled people portraying someone with a disability. There’s been a lot of attention given to whitewashing in films, and rightfully so. But the opposite seems to be true of the portrayal of people with disabilities throughout pop culture. In fact, actors are likely to get nominated for an Oscar for their ‘brave portrayal’ of a disabled person ‘overcoming such adversity’. Is that right though?

For me, it’s hard to say. Would it be better if the role were played by someone with a disability or is their worth enough in drawing attention to those so often ignored? For a long time, there were almost no depictions of disability in popular media apart from the tragic anti-hero (think The Elephant Man or One Flew Over the Cuckoo’s Nest). Even looking at a show like Glee it’s hard to know where to stand between Lauren Potter, an actress with Down Syndrome and Kevin McHale, an able-bodied actor whose character is confined (in most scenes) to a wheelchair. Should we expect authenticity there though? It is, after all, a singing high school where all the teenagers look nearly 30.

It’s been this way for a while though. I (like probably many others) don’t think I had ever heard of autism until I saw Rain Man. Yes, there was the shortcoming that everyone assumed autism corresponded to being a card-counting savant, but it also increased visibility and funding for the disorder. Was it worth the publicity? Is that expecting too much? As for movies, should they only be viewed as entertainment and nothing more? I mean, I still love Patty Duke in The Miracle Worker and Leo in What’s Eating Gilbert Grape? but is the quality of a performance enough? It shouldn’t be, but we have to start somewhere.

Movies can have a powerful impact on society and can be culturally relevant. Even a commercial (i.e. Apple‘s accessibility spot with Sady Paulson) can be meaningful and impactful. It is starring and edited by a person with a disability as well as being marketed as a way to offer greater freedom for those with disabilities. This is a great example of people with disabilities being represented at all points of a project: design, creation, and target consumer.

Now that people with disabilities are being represented more frequently it’s important to make sure they’re being represented properly. That means we don’t want people with disabilities unfairly demeaned and made servile. I love the movie Avatar, but why is the fact that Jake Sully is in a wheelchair enough of a backstory to justify his suicidal self-loathing. I get it’s already a long movie and he’ll be inspiring later, but that’s some lazy writing.

On the opposite end of the spectrum, the sheer presence of a person with a disability attempting any sense of normalcy shouldn’t be considered inherently moving. Someone in a wheelchair can be a jerk in a wheelchair. When their mere existence is magical then it becomes inspiration porn. I know it can be a fine line between respect and exaggerated admiration, but having difficult discussions about groups of people whether it’s related to race, gender, or disability is all about getting close to those lines. The purpose here is not to ruin your (or some of my) favorite movies and tv shows. In fact, much of what I list here are movies I know because I have enjoyed watching them. It’s simply to make you aware of the stereotypes and tropes so you can be a more informed viewer.

There are a number of ways people with disabilities are misrepresented in pop culture. Here are a few examples.

We seem to be making progress, but some shows still seem off the mark. Atypical, in my opinion, seems to do for autism what Grey’s Anatomy does for doctors. And by that I mean it makes you say, “what’s the point of being doctors when all they seem to do is have unnecessary drama and make out.” There are no autistic actors or writers and it can seem like the main character with autism serves as the target of jokes for the show and characters in it. I like the Good Doctor, a show about a skilled surgeon on the spectrum, but it does get into disabled superpower territory when Dr. Shaun Murphy seems to go in a trance while complex visualizations tell us his ‘sixth sense’ is coming up with a solution. In the show, Shaun also seems to have learned almost no social coping skills in his 20+ years despite being skilled enough to make it through medical school.

To their credit, more and more network shows and movies are highlighting people with disabilities. Some do a better job than others, but that may be a good thing since a film or show doesn’t have to be award-worthy just because a disabled person makes an appearance. In one sense I guess that’s progress.

For example, I have problems with the show Speechless, a show depicting the family of a teen with cerebral palsy played by an actor with the disease, on issues entirely unrelated to disability. I believe its based on the creator’s (a man with CP) true story that took place decades ago while the show is set in modern times. That’s why JJ, the main character, uses of a speech board and personal speaker though it makes little sense when he could easily have greater independence with a digital AAC device. It’s an issue the show only weakly attempts to answer. They continue to discuss increasing JJ’s independence but insist on keeping ‘his verbal sidekick’. Of course, that wouldn’t lead to the crazy hijinx that must inevitably ensue on a 30-minute sitcom. All of that could be fixed if they simply set the show in the 80s. To its credit, the show does address many of the tropes above head on though as well as the family’s shortcomings and JJ’s want to be viewed as something other than a symbol of inspiration.

People with disabilities were institutionalized and marginalized for many years, and Washington D.C. and Hollywood should lead the discussion the way America did with the passing of the Americans With Disabilities Act.  I ‘m not entirely sure where we currently stand if mocking people with a disability gets shrugged off. I don’t know if our nation could again elect a disabled president as they did with FDR, but Bob Dole, who has an injured arm came close and Illinois recently elected Tammy Duckworth who has prosthetic legs.

People with disabilities in the media are even more prevalent. Regardless of whether you like the shows or characters Sheldon and Amy in The Big Bang Theory and Temperance Brennan in Bones are popular characters who are likely to be on the autism spectrum. Netflix documentaries like Wizard Mode give an even more accurate depiction of someone with autism. I enjoyed The Shape of Water and even though it’s hard to find the exact goals in so unusual a film it is clear that one major message was about how those who are different are often downtrodden, but we often don’t recognize their hidden strengths. The movie portrays several groups in the left to the margins of the 1960s including people of color, a gay man, most women, and Elisa, the mute lead character, who has (spoiler alert) inherent challenges like shouting for help when she’s nearly assaulted. At the same time, the film goes out of its way to demonstrate that her loneliness was not unique to her difference. She could express bravery and fear that were universally understandable even in a story about a mute woman and a fish man. The ABA program guide introduces a number of other tv characters on the autism spectrum while Iris Films gives a more complete list of examples of disability in the media.

Marlee Matlin who was one of the early pioneers who was told by some that “she only won an Oscar out of pity” still remains a force for disabled actors in the industry. Shows she has participated in like Switched at Birth star deaf actors and, for the most part, reflect the reality, be it made more dramatic, of people with hearing impairments. I’ve only seen it once, but it’s a positive change that Daryl “Chill” Mitchell, who was paralyzed in a motorcycle accident, plays an investigative computer specialist on NCIS: New Orleans. We can see RJ Mitte, an actor with cerebral palsy, wonderfully play Walter White Jr. in Breaking Bad where his disability was one of the least interesting parts of the show (and I mean that as a compliment). The point is that actors with disabilities should be appearing in shows whether or not the disability is a prominent plot point.

Yes, good has come from past portrayals by non-disabled actors playing cookie-cutter characters with disabilities even if it was only to bring attention to the issue. There are wonderful strong characters like Furiosa in Mad Max: Fury Road whose missing arm is an occasional annoyance and an occasional advantage. Even animated films like How To Train Your Dragon can be a realistic and heartfelt (apart from the dragon) portrayal of disability in people (and dragons). Characters with disabilities should appear in normal situations as well and don’t have to be overcoming great odds to be relevant. We should seek to have the increasing number of disabled characters (generally a good thing) played by disabled actors (a better thing) in stories written and directed by people with disabilities (the best thing). Superfest, an international disability film festival is looking to do just that.

5 thoughts on “Disability And Pop Culture”