The idea of robots in a classroom is likely to cause you either a feeling of excitement or dread. Perhaps you, like Elon Musk, are worried about some future robot armageddon brought on by the artificial intelligence that will enable the bots to harm your digital information, take your job, or endanger your personal well-being. Perhaps though, you are like me and grew up enjoying R2-D2 and Short Circuit and you relish the opportunity to drive student engagement through computer science in the classroom in a way that is physical and tangible for students.

School robotics likely wouldn’t exist in its current capacity without Seymour Papert. Papert theorized in in Mindstorms (1993) that children can learn to use computers substantively in a way that will alter for the better their capability to learn everything else. Papert built on Piaget’s theory of constructivism, a focus on student-centered discovery learning was essentially the father of STEM and project-based learning. He also helped examine early AI, create Logo which led to Scratch, and developed LEGO robotics. I wholeheartedly agree with him that learning is best facilitated by having learners actively engaged rather than simply being passive recipients of instruction.

The role of the teacher is to create the conditions for invention rather than provide ready-made knowledge.

There are a number of reasons using robots can benefit your students apart from just making you seem like a cool STEM-centric educator.

Sphero makes some of my favorite classroom robots that I would happily just play with for hours, but their educational resources are what really set them apart. They have full lessons, example programs, a thriving community of contributing educators, and professional learning. The programs and lessons turn your Sphero into more than just a roving robot. You can use the Sphero to tell an interactive story, to study the planets, or solve Pythagorean problems. Their app gives you all the sensor data from the Sphero that you could use for science or math-related lessons.

The Sphero Edu site (along with the app) allows you to set up classes, assign student projects, create programs, and join in Thursday Learn Day. That’s the day Sphero shares a new program and way you can integrate their bots in the classroom covering everything from turning it into a magic 8-ball, mastering Olympic curling, or leading a rousing game of hot potato. You can also program Sphero with other software like Apple’s Swift Playgrounds as well.

The Sprk+ is recommended for classrooms as it’s clear shell and many sensors allow for more complex programming, but they offer several other bots as well. The Sphero 2.0 is a consumer model while the Sphero Mini offers a less expensive alternative. The Ollie is a fast and furious option meant more for racing and tricks while their series of Star Wars inspired bots will thrill your inner geek.

The tiny Ozobots are so simple and so entertaining. They can be ‘programmed’ just by drawing with some markers on paper. The way you draw, the colors you use, and the patterns you make all determine how the bot reacts. There are more advanced skills that students can master by programming in Ozoblockly, their block-based coding software, that allows students to take full advantage of the Ovobot Evo’s proximity sensors. Younger students though can stick with the marker programming to get an understanding of how robots interact with their environment. Try some Ozobot soccer as an example.

The Evo is their latest bot recommended for educational activities. They are more expensive than you might expect for their size, but they are capable of challenging advanced learners while still being accessible to early learners. Check out Ozobot’s full lesson library for more information on how to integrate it into instruction. Their deconstruction series is one of my favorites.

Dash and Dot are really cute bots for the elementary set, but their voices and demeanor sometimes enter the creepy robot zone. That’s because they recognize each and will communicate even if you’re not nearby. They are much more humanoid than the previous bots on this list, so they are meant to interact more with students on a personal level.

The accessories for the robots are meant to engage young learners through music, ball games, and brick connectors. Their educational resources include a coding curriculum, professional development, and a robotics competition with major prizes. For older robot aficionados they offer Cue which is more customizable, has more sensors, and more programming options. The software for Dash and DOt are simple block based options for beginning coders.

I previously shared 5 ways to use LEGOs to make everything awesome in your classroom, but the best reason is that they are familiar tools for nearly every student. That means there is an automatic personal connection in addition to the fact that LEGOs represent an infinitely modifiable tool. That malleability is important in that it allows for open creativity amongst students to design and create solutions for any world problem or challenge they desire to address.

Three important facets to know about LEGO Education, apart from them amazingly fun, are that they have kits suitable for various ages, the cover multiple subjects/skills apart from computer science, and they have curriculum resources and competitions to extend learning. For beginning learners, there is STEAM Park which will remind you of Duplo and is more for role play and problem-solving instead of robotics. The robotics kits include the WeDo 2.0 for younger students and the EV3 for older and more advanced robotics teams. There are a number of ways to incorporate LEGOs in literacy as well including storytelling displays. You can look into creating or joining in Lego League competition as well.

Cubelets are essentially programmable blocks which serve as a robot construction system. There are 17 types of Cubelets and each has a special ability and they connect magnetically. Students can mix and match them and combine them with LEGO bricks to fashion a robot of their own. They are programmable through apps, but that requires the Bluetooth Cubelet. They have a series of engineering and exploration lessons for K-12 students using the blocks.

Fisher Price offers several robotics options in their Think & Learn series including the Code-a-Pillar which allows children to gain a beginning understanding of programming by attaching different directional or sound segments to program the robot. You can create maze challenges for the students to solve.

The Robot Mouse and the Bee-Bot are two other simple programmable toy robots for young students. They function similarly with students creating a step-by-step path for the robots using a keypad and coding cards. They have lights and sounds to engage students while they learn basic programming and sequencing. 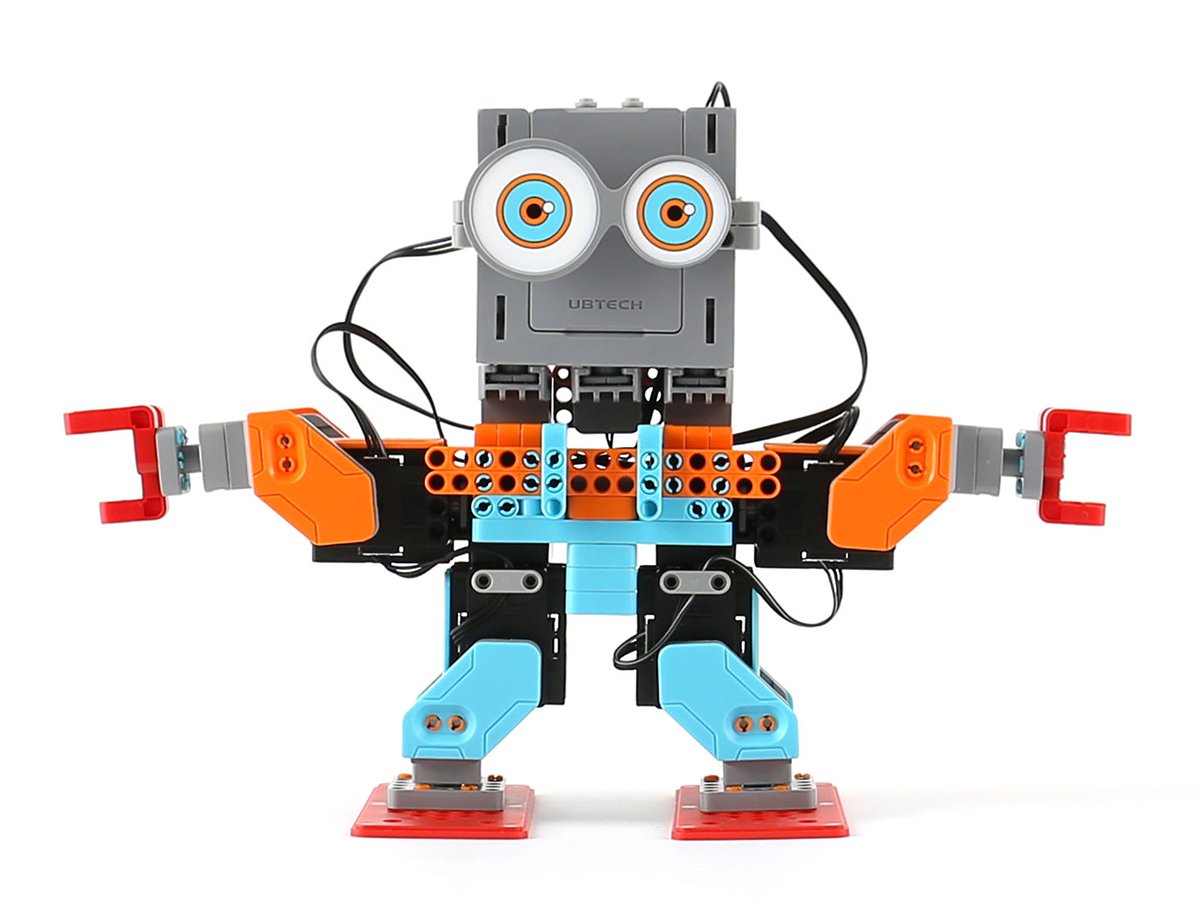 These are fairly new robots and I’ve only recently begun using them with students. They are relatively straightforward and offer several options for various student levels. Robotis is similar in some ways to LEGO robotics and the Robotis Play kits are at a level similar to the WeDo. The other Robotis options are much more expensive humanoid robots similar to the Nao that I would recommend in its stead.

Jimu has some fun robotics kits to create a dog, dinosaur, and various animal and machine creations. They are more reasonably priced than the advanced Robotis kits and the software including building directions and built-in actions is incredibly detailed and easy to control.

Several years ago the Nao was supposed to be the amazing new solution for teaching programming to students. You’ve probably seen videos of them dancing on YouTube. To me, it was marketed as a social solution for my students with autism. And I have seen barely-verbal and socially challenged students open up with the Nao in ways that they struggled to do with adults and other students.

I credit Nao with introducing me to the benefits that come in introducing students with disabilities to computer science and robotics. I have to admit, when it is working as intended, it is really amazing to watch. Overall though, most of the benefits that offered seemed achievable through less expensive and easier to use solutions. Neither the Aldebran nor the Choregraphe software is accessible for the average teacher, so it’s beyond most classes.

You can check out RobotLab to find package deals on several of the robots here. Students can also use tools like littleBits or Sam Labs to put together their own robotic creations using a variety of classroom materials. The Arduino, Raspberry Pi, or another microcontroller can help you create more complex programs for your robot. If you’re looking for a simpler task for your young engineers, you can try to create a brushbot using a toothbrush and simple vibration motors that you can find for under $1. There are robots for every price range.

10 thoughts on “8+ Ways to Bring Robotics To Your Classroom”