Find the updated version in The Big 3 in Education

The#NYCSchoolsTech group introduced something new to this their Summit this year: The Smackdown. Panels of teachers debated the pros & cons of one EdTech tool vs. another. Early on it was Office 365 vs. G Suite. While the panel made some good points, I think they didn’t address some of what I find to be key differences. So, I thought I would do that here.

THE WHAT & THE WHY

Since I’m an educator certified by Google, Microsoft, Apple, and more I think I can provide an unbiased look at these tools. In fact, I consider myself fairly device agnostic (he says typing this on his MacBook), because I use whatever tool I think is best for a job whether it be an iPad, Chromebook, or a Surface. I’ve gotten to play with all of them and see what purposes they can best serve along with their limitations. I should say that the NYCDOE rolled Office 365 for all employees in the past couple years and were committed to Outlook before that. That doesn’t mean that the DOE and my district don’t also provide training to set up and use G Suite as well as Office 365 for individual schools. Yes, the school would even have to set up a separate O365 if they wanted to add students accounts or have access to admin tools.

I’ll begin by saying I’m not going to address the basic productivity tools much (slides, spreadsheets, doc editors, or email) as that will be an entirely separate post. I also won’t delve into platforms like Apple Classroom, Schoology, Canvas, Edmodo, Blackboard, or Moodle as they provide a different service and can be used in conjunction with O365 or GSuite. I’m also not going to walk through the how-tos and basics. That’s another post entirely too. But OurICT has a beautiful infographic that digs in deep.

This is the section for tech admin geeks. Both platforms have clean well-designed management UI and it comes down to your preference for text vs. icons. Office actually has 2 options for looks for the standard user vs. the admin. When you get deep into the weeds of managing Google devices or groups, it might take some searching to find the settings you’re looking for since it uses a lot of slide out panels and sometimes you have to click show more. If you’re a heavy admin user, both are easy to adjust to. If you’re trying to fix things on the fly through one of their mobile apps, the O365 version is more robust while the G Suite admin app only covers some basics and will require a computer (Chromebook perhaps?) to do more advanced administration.

ADVANTAGE: slight lead to O365 for the uninitiated user

Microsoft allows validation by either phone or email. Google doesn’t add validation, but it does offer 2-factor authentication capability (don’t be a Podesta). Both Office 365 and G Suite are COPPA (Children’s Online Privacy Protection Act) and FERPA (Family Educational Rights and Privacy Act) and both have signed student privacy pledges. Google’s Vault though adds an extra layer of information saving security that isn’t free from Microsoft.

You might think this category is an auto-win for Google, the long-time kings of collaboration, but now, Office 365 and Apple’s iWork both offer similar availability across device types. Editing with multiple users at once is still more intuitive in Google as you don’t usually have to worry about online vs. offline copies. Also knowing when to use OneDrive vs. Sharepoint and how to integrate the two requires some tech savvy.  It’s also much easier to link a lot of resources, hangouts, and connections through the Google Calendar.

Google Plus is a social network used by families and businesses to connect with people, and you also get Google Hangouts and YouTube Live (formerly Hangouts on Air) as tools to get your message out. Google’s Groups are good, but not innately intuitive for the average teacher. O365 also does groups and it’s fairly similar.

Office has a number of tools like Yammer and Lync (see Skype) for private communications. They have Teams (sort of like Slack that they almost bought) for group sharing and communication. More doesn’t necessarily mean better though. What they do have is Skype for business which has long been the go-to for computer calling, video chats, and conferencing.

So you have Microsoft Stream vs. YouTube. Stream is decent, but if you know how to use the privacy features on YouTube then this is really no contest.

ADVANTAGE: Yes, Google, but by less than you would think.

On the help front, both platforms offer support through the admin console, but in talking with admins the Google folks seem adamant that their 24/7 help is quicker and provides better customer service and I’m inclined to agree. Both Google Help and Microsoft Support are worthwhile for any common questions that might arise.

Microsoft’s Educator Community does have a lot of resources for learning, gaining badges, and connecting with other EdTech adventurers. Actually, the best aspect may be its ability to connect to other Skype teachers and education advocates across the globe for Skype lessons, field trips, and Mystery Skype adventures.

Google’s Training Center used to be too tech-heavy and confusing, but now it is streamlined and focused towards the classroom teacher. It is a wonderful place to train and get ideas for how to adapt and use Google’s many tools for use with students.

Of course, you can always search for your unanswered question on Google or just Google how to find Bing (on Yahoo, AOL?)

ADVANTAGE: Microsoft, their PLN (personal learning network) connections put them a hair ahead

This is again a seemingly automatic category with Office being the offline behemoth for productivity with, now free, mobile apps. OneDrive can also be synced prior to going offline along with Sharepoint. Outlook calendars, contacts, and email also function offline. Google now allows a lot of offline editing as well as files downloaded to your computer. Your Google Drive can be set to store offline as well though you can’t share between applications offline. Gmail can also be configured to view and compose emails offline. Chrome can be used to view calendars even without the internet, but new events cannot be created.

ADVANTAGE: Yes, Microsoft, but by less than you would think.

So both O365 and Suite give unlimited space to teachers for storage. Google Classroom, though not a full-fledged LMS (learning management system) yet, is filled with wonderful features for coordinating work, communicating, assessing, and connecting to other apps. Combined with the wonderful assessment tools in the Forms app including automatic visualization of your collected data, Google provides a smooth and friendly environment for class work. As for Microsoft, I can say that Microsoft Classroom and Microsoft Forms now exist (or did for a bit). Although that might not even remain true. I will bring up OneNote and it’s strength for lesson creation and student submissions, but I’m saving its other features for the next section.

Microsoft has reconfirmed its commitment to accessibility since their new CEO’s takeover in 2014. Google Accessibility is also determined to put both money and effort into reaching struggling learners and people with disabilities. Android now has TalkBack, BrailleBack, Switch Access, and Voice Access built into the system. A lot of this has to do with devices so I will focus on resources and tools built into the platforms.

Chrome and Microsoft’s Edge both have a lot of basic accessibility tools (text to speech, speech to text, magnification, etc.) but don’t go far beyond that. Google though is connected to a lot of great app extensions to help. Bee Line Reader, Grammarly, Readability, and Read & Write all help with literacy. 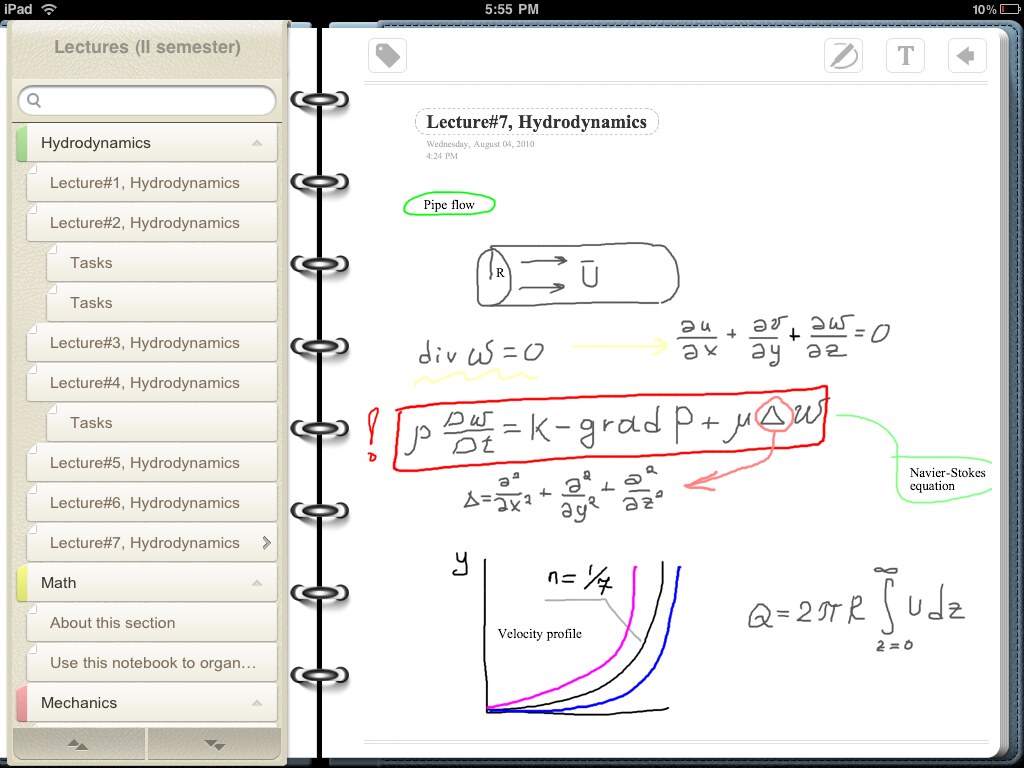 The one big advantage Microsoft has comes down to OneNote, their greatest contribution to educational software to date. You or a student can get your ideas down through writing, typing, audio, video, or graphics and OneNote will categorize it and make even those handwritten notes searchable (depending on your penmanship). Then their learning tools, including the immersive reader, take it to another level entirely.

In the end, I don’t think either platform does as well as Apple does in its effort to make learning accessible, but I am happy to see them both moving forward in this regard. That will help every student in school have a chance to access the learning regardless of the school’s commitment to a brand.

ADVANTAGE: Microsoft wins, but they both have more work to do.

You can download a number of educational apps and games from both the Chrome Store and Microsoft Store. Google’s collection is definitely more extensive, but both have similar options depending on the browser or device. My favorite Google learning tool/game might be Build with Chrome which is a virtual Lego builder. To save your work you need a Google login. Microsoft has tools for Lego WeDo. Buying Mojang and creating the award-nominated Minecraft Education Edition is a game-changing (pun-intended) development for Microsoft though. It is an awesome open-source learning software that requires O365 logins for students, but, in exchange, gives you access to a number of Education Edition only features.

ADVANTAGE: Microsoft wins since most of Google’s learning games don’t require a login and work with Chrome on any device.

Well, I just told you Android and Google reign on apps and partnerships in terms of sheer volume, but Microsoft’s long connection to software developers through Windows and Xbox can’t be underestimated. Recently though Google has begun to curate its partnerships more stringently, so only the select few companies can be called Google for Education partners. Given that Microsoft Classroom may soon fade or have a new face the question becomes what are we connecting to?

ADD-ONS: Google reigns on the shoulders of Classroom. 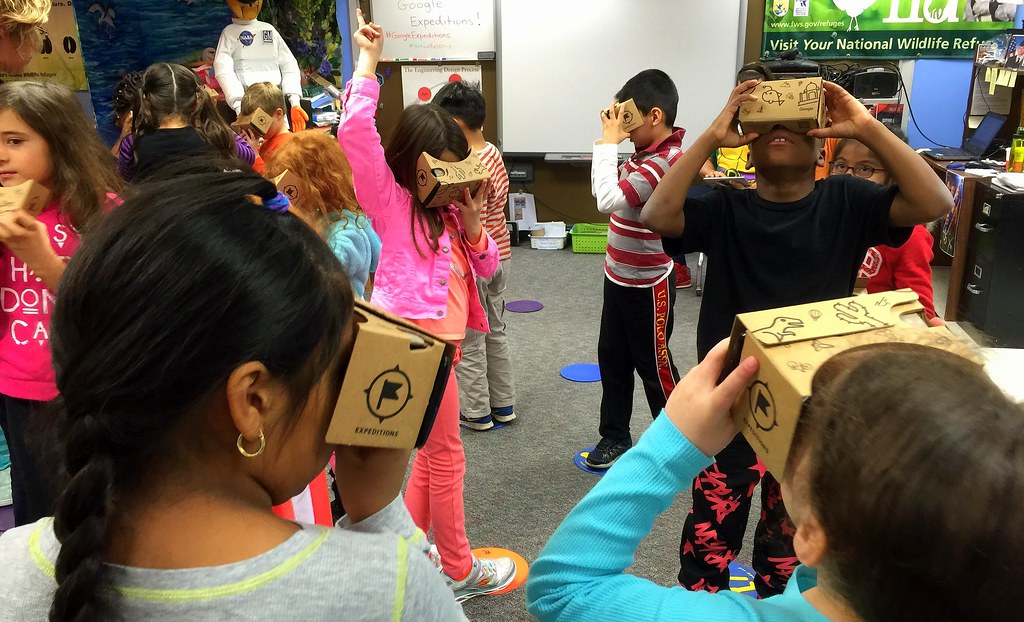 It is sort of meaningless to list these extras except to give you the resources as most are viable apart from a commitment to either platform. Microsoft has a cool presentation tool in Sway, fun exploring with Mystery Skype, and a way to improve productivity with Flow. Google has a good teaching tool for connecting with parents in Google Voice, fun exploring with Expeditions and My Maps, and graphics with Drawings. Both have computer science programs, but that’s will be one more post as well.

ADVANTAGE: It depends on what you need.

As I said a lot of it comes down to what you want, what you’re comfortable with, and what devices you already have. That said, for the average classroom teacher, Google is gonna be their answer due to the strength of Classroom and its connections to outside services. In my opinion, though this is all a false dichotomy. Why choose? My district has both set up and we’re not forced to choose between great in-class connections and engaging game-based learning. You can set up matching accounts in both with identical logins on the same domain, so it’s not an extra thing to remember. Yes, you have to choose only one for email, but that’s a small cost. So I say let your teachers connect and collect assignments in Google Classroom while others are lesson-planning in OneNote and all are having fun doing digital PBL (project-based learning) through Minecraft.

Why limit yourself or your students when the future certainly won’t. 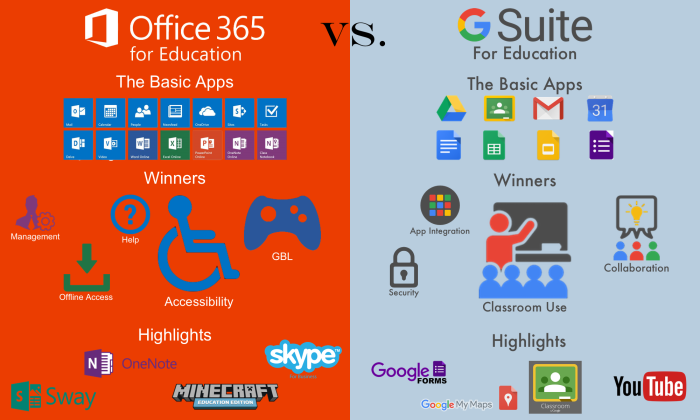